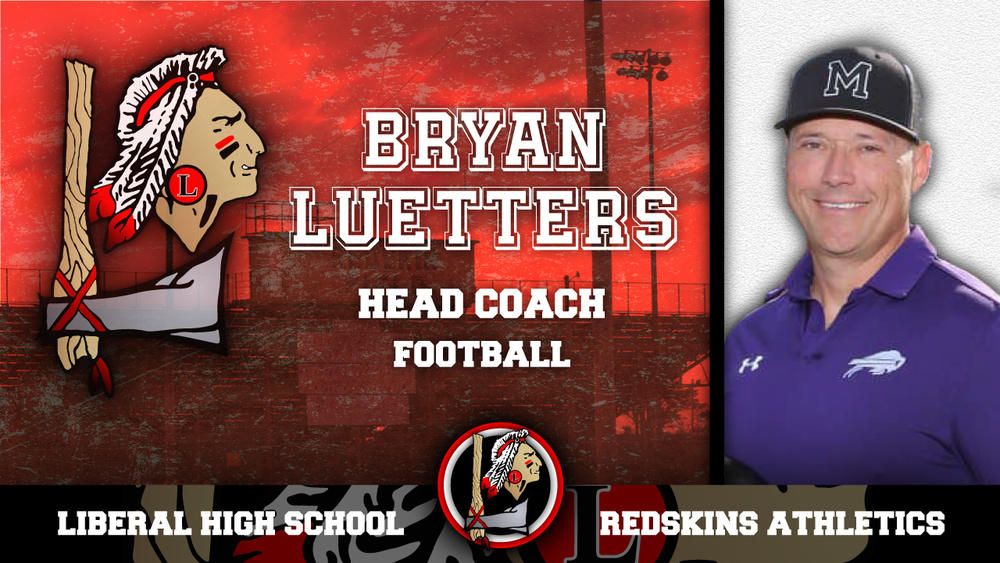 Liberal High School is pleased to announce the hire of Bryan Luetters as the new head football coach pending approval from the USD 480 Board of Education.

“I would like to welcome Bryan Leutters to the Liberal High School family. His background includes successful tenures at the state level while his values and vision fits well with the football program here in Liberal,” said Kerri Miles, Liberal High School Activities Director.

"I can't express how appreciative I am of having this opportunity to coach and teach at Liberal High School. Everyone I have met so far is very positive and supportive. I am looking forward to getting to know all students and players on a personal level,” Luetters said.

Luetters, a Dodge City native, moved to Meade in 2009 and immediately began immersing himself in their community by working with the local youth football program. He began with two seasons as the 5th and 6th grade rec league football coach before moving into an assistant role for Meade Middle School in 2013.

“I look forward to meeting and working with the Liberal High School staff, coaches and administration, and getting to know members of the Liberal community,” said Luetters.

“Coach Leutters is an exemplary coach, teacher, and community leader. We are very excited to have his expertise, enthusiasm, and leadership in the football program and in the classroom,” said USD 480 Superintendent, Dr. Todd Carter.

"I look forward to Coach Leutters working with all of our student athletes and taking our football program to the next level. I am also excited about his drive to build leaders on and off the field while also giving our students a great experience playing the game of football," Miles said.

Beginning in 2017, Leutters also served as Meade High School’s Powerlifting Coach where he led two students to first place victories at the state level. Luetters credits his success both on the field as well as in the weightroom to a 6 a.m. yearlong weight training program he started at Meade that he grew from a single participant to 16 consistent members.

“Coach Leutters exemplifies the qualities our student athletes, parents, staff, and administration are looking for as an educator and coach,” Dr. Carter said.

The USD 480 Board of Education will make a final decision on the hire of Luetters at their January 10 meeting. If approved Luetters will begin his tenure at LHS at the conclusion of his current contract in May.

“The game of football taught me many life lessons, my goal is to help these young men gain all these positive experiences from the game. I can not wait to get started. I will put everything I have into this program and school,” Luetters said.