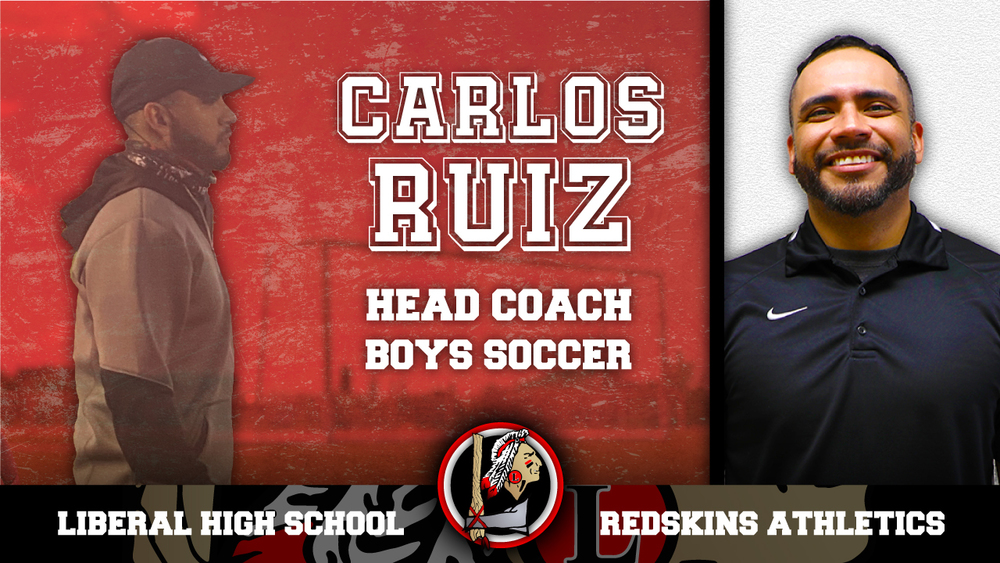 LIBERAL, Kan. - Liberal High School has announced the hiring of Carlos Ruiz as the second head coach of the boy’s soccer program following the resignation of Lori Navarro this past fall.

“We are excited to have Coach Ruiz at the helm for the boy's soccer team.  He expects excellence of the student-athletes and is committed to doing what it takes to help them to succeed on and off of the field,” said Ashley Kappelman, LHS principal. “Moreover, he demonstrates pride in being a Liberal Redskin and is dedicated to instilling that same pride in the young men and women he coaches.”

Ruiz has a long history with the LHS boy’s soccer program. He has been affiliated with the program in one way or another since his freshman year of high school.

“I’m thankful for this opportunity; I know there were some good candidates,” said Ruiz. “I’m grateful the administration has put their faith in me.”

Ruiz played under Navarro from 2005 to 2008, before becoming an assistant coach the following season. Following their state title in 2011, Ruiz would step into his first head coaching position for South Middle School in Liberal.

“I played for Lori and coached with her and those are big shoes to fill when you come in after someone like her with so much success,” said Ruiz. “As a player, I have great memories of playing in big games, winning championships, and playing for state. Then as a coach I got to be part of the team that won state, and it just felt great.”

Ruiz served as an assistant to Navarro from 2009 to 2012, and 2015, then in 2016, Ruiz was named the head coach of the girl’s soccer program and stepped away from coaching the boy’s team.

“I want to thank her for the opportunities, she gave me my first shot as an assistant coach, as a player she saw me as a leader and team captain,” said Ruiz. “I think it gives her some comfort knowing the program will be in familiar hands.”

“It is never easy to follow a Hall-of-Fame caliber coach in Lori Navarro, but I know Carlos is very capable of leading our boys soccer program,” said Kerri Miles, LHS Assistant Activities Director. “Lori has been a champion on all levels, and it will be huge shoes for Carlos to fill. I feel Carlos will take on the challenge and look to exceed any expectations that may have been placed upon him. Carlos understands the inner workings of the program and past successes, and I know he wants to win as much as the entire community of Liberal.”

The team lost a good senior class at the culmination of the 2020 season, so they will have a young roster when Ruiz takes the helm in 2021. There will be big holes to fill on a roster with new and untested players, meanwhile participation numbers continue their downward trend.

“I think we would really like for younger athletes to pursue high school sports more than what we have seen in the past. Increasing numbers in the program can be beneficial to the program in so many ways,” said Miles. “This will allow Carlos to help build the program for now and in the future.  Carlos is very knowledgeable about soccer and has put together a plan that will keep LHS soccer relevant in a tough Western Athletic Conference.”

“My hope is to get the kids excited again about the program, give it some new life because even though they’ve had some success in recent years, they haven’t been back to state since 2012,” said Ruiz. “I believe being young will benefit us in the long run.”

Ruiz hopes to breathe new life into the program to get the students and community excited about the program like they were in the past and in turn bring participation numbers back up.

“Carlos has been a part of our soccer program for a while. He has increased the participation numbers and success of our girls program, and I know he will do the same for the boys team,” said Miles. “My expectation for Carlos is to encourage athletes who did not go out the last few years to get them back involved in our program here at the high school.”

Ruiz considers himself a “player’s coach” and prides himself on building relationships with his players. Despite not being on the field with the boy's team for the last five seasons, he has remained close to the program by being a play-by-play commentator for the radio broadcast of the games, so he has some familiarity with the players coming back next season.

“The last time I coached the boys was in 2015, so all the players I coached are now gone,” said Ruiz. “I’ve got to watch a lot of the boys play, but as for building those personal relationships, I don’t know the boys in that way.”

One way Ruiz looks to improve the team and create relationships with his new players is an off-season training program, both in the weightroom and on the pitch.

“The goal is to be there all summer in the weight room getting stronger and getting faster,” said Ruiz. “Then we will focus on our summer camps and look for some summer tournaments that can challenge us going into the season.”

“I’m big on the summer weight program; I went through it when I was a student here, and I know how important it is for a student athlete, so this offseason definitely needs to be focused on staying consistent in the weight room,” said Ruiz. “The most important thing is educating them on why the offseason is so important.”

Having spent the last five years as the head coach of the girls’ soccer team, a position he will continue in, and being around young players since his playing days Ruiz understands the current generation of players and what drives and motivates them.

“They have to understand why, especially with this new generation. You have to build that relationship with them and explain to them why we are doing things. You have to level with them; the old school way of doing things doesn’t work anymore,” said Ruiz. “Kids evolve, the game evolves, so as a coach you have to evolve too.”

Ruiz hopes to bring the same high level of expectations and goal-oriented approach to the boy's team that he did when he started as the head coach of the girls’ program.

“Our girl’s team is going to be strong this season; the culture and expectations we’ve set over the years have given the program results on and off the field. This is my fifth official year as the girls’ head coach, and we expect a lot from this season,” said Ruiz. “The five year-plan we made when I started, included things like winning a conference title for the first time, as well as making a deep playoff run. We have the team to do that this year.

“Playing with Liberal across your chest brings a sense of pride in our community, and I feel Carlos already being a Redskin can push that pride a little deeper into our younger athletes to play soccer for Liberal High School,” said Miles.